Steven Kwan, the Sultan of Swingle.

The Cleveland Guardians Steven Kwan has become the Sultan of Swingle. Kwan's amazing start to his major league career began as a no chance spring training invitee who ended up not swinging and missing at a pitch during spring training. 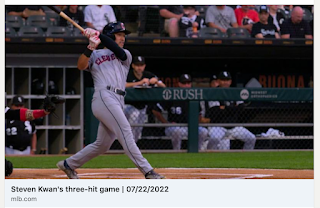 Proving spring training was no fluke, Kwan made the Guardians opening day roster and energized the entire team into believing in bat contact. Kwan did not swing and miss at any pitch during his first several dozen at bats.

Kwan then experienced a dramatic down slope to his budding career. Kwan's Awesome April turned into a Miserable May as he began launching sharply hit fly balls after hitting the first home run of his career.

After the league adjusted to Kwan, Kwan re adjusted to a league that was annoyed at his ability to extend almost every at bat to an annoying amount of pitches, Kwan's June and July have been terrific.

I'm not sure what actually separates Kwan from being an actual .310 hitter or better and a player competing for a batting title other than his ultra bad month of May.

Kwan's monthly batting average stats for 2022 so far are

For all the above reasons, Sportscam Detective is hereby naming Steven Kwan the Sultan of Swingle, which sure as heck beats being the Sultan of Wind Sails, if you get my drift.

Posted by Alessandro Machi at 4:35 AM