The Argument that NCAA clock management can't accurately dictate when the clock will start after a missed foul shot is tipped is flawed. In the Purdue vs Virginia 2019 Elite Eight game, EVERYBODY in the Arena knew the second foul shot had to be missed for Virginia to not end up losing by one point. 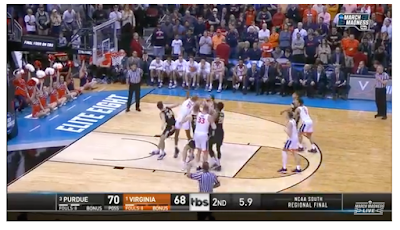 Ball being tipped with 5.9 seconds left from about 12 feet from the rim. 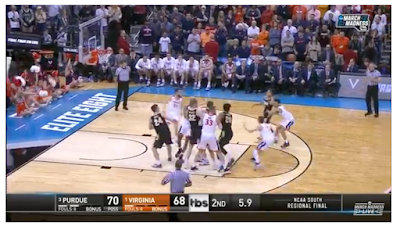 Tipped Ball Travels about 10 to 12 feet after tap without the clock moving. Ball is in the air on level with the rim, near the 3 point line. clock is still stuck at 5.9 seconds.

During the time the Clock did not move, the ball was tipped and then floated through the air for 10 to 15 feet before the Time Clock moved from 5.9 to 5.8 seconds. Sports Cam Detective calculates that between 0.25 to 0.33 seconds elapsed before the Clock started. 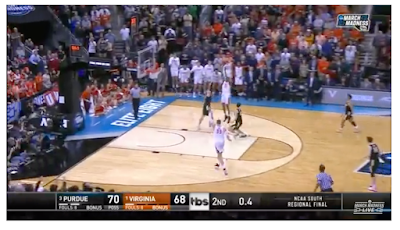 Virginia Game Tying Shot in Regulation against Purdue appears to be on one fingertip or just leaving fingertip with 0.4 seconds left. However, the clock won't change unti it is .30, so we don't know if there was .4 or .31 seconds left. If only .31 seconds was left when the shot left the fingertips, the late clock start at the beginning of the play probably caused the shot to be taken after time had expired. Aren't you curious to know the real truth?

It appears the Shot that tied the game was taken with around 0.4 seconds, but it might have been anywhere from 0.40 to 0.31. If the Clock had started at the moment the ball was first tapped, it is possible that the shot might have still been on the Shooter's fingertips as the clock turned 0.0.

Whether or not the Shot would have still been within time, it sure would have made for one of the most gut wrenching NCAA Elite Eight regulation endings as fans waited to learn if the ball either barely left the shooter's hands, or barely was still at his fingertips as the time expired.

In Sports Cam Detective's opinion, Clock Management may have altered the destiny for the 2019 NCAA tournament for Purdue and their Fans, yet it will never even be investigated. Without an investigation, no discussion of some type of method can be implemented so future games don't rely on the whim of when the shot clock starts so late in a game with so much on the line.

Lets not forget that in overtime, as the game was well in hand, the Referees suddenly were very big on clock management and kept referring to the scorers table to make sure the game clock was accurate. If that same level of attention had been used in regulation, Purdue might have been the winner.

One other aspect of the final play that will probably be overlooked to some degree is the absolutely perfect shoulder level pass. If the final pass had been anywhere else but where it was thrown, precious time would have been lost as the shooter would have had to rebalance before taking the final shot, and that could easily have taken an extra 1/3 to 1/2 second.

While it is possible that clock management may have affected the outcome of the 2019 Purdue / Virginia game, without the final perfect pass the final shot would have been late even with the late clock start.
Posted by Alessandro Machi at 12:10 AM